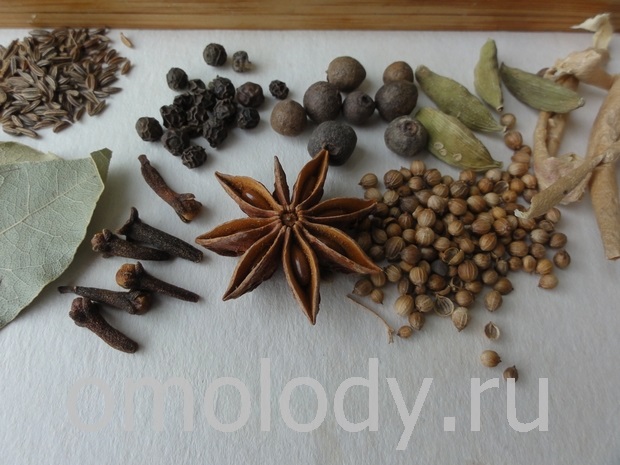 Spices are different plants that are used fresh or dried in small quantity to impart special aroma, taste or flavor strength or even to make the dish look in a more attractive way. Spices can be added to the dish whole (peas, leaves, stalks) or ground. Whole spices contain more aromas; therefore they often go to liquid dishes Ц soups, compotes, kisels, and sauces. Ground spices are better for meat, egg and vegetable dishes. Ground spices lose the aroma very quickly, that`s why they must be ground before use.
Spices are added, as a rule, to the dish 5-10 minutes before finishing or even at the end.
Keep spices in glass or ceramic dishes.

Allspice
Allspice is the dried, unripe berry of a tree indigenous to the Caribbean and Central America. As its name implies it tastes of a mixture of cinnamon, nutmeg and cloves.Allspice complements - beef, pork, chicken, sausages, fish, cheese, pickles, stewed fruit, cakes, and biscuits.Allspice is a traditional spice used in pickling and can be added to the liquid when poaching fish. Allspice can be used as whole berries of different colors. Ground all spice is added to sauces, kefirs, matzoni, egg and rice dishes.

Black pepper
Thanks to unique piquant taste, Pepper complements all savoury dishes. Black Peppercorns should be large, even in size and a deep rich brown colour. They should be hard and free from stalks and dust. Good quality Black Peppercorns will keep for many years. Their warm pungent flavour is released on grinding and is enhanced by heat. However, once ground the volatile oils soon evaporate so add freshly ground Pepper at the table or towards the end of cooking. Pepper stimulates the digestive juices, increases the appetite and aids digestion. Add Peppercorns to stocks, pickles especially soused fish, marinades, meat dishes and salads.

Cloves
Cloves are the dried, unopened flower buds of a small evergreen tree. Cloves have a strong sweet, pungent flavor. Cloves should be large, plump and oily with a warm, reddish brown color.
Cloves are known to have antiseptic properties and their smell is often associated with the dentist. Their use as a preservative in pickles and spiced dishes is well documented. Cloves complement - ham, gammon, onions, rice, apples, cakes, biscuits, desserts, mulled wine, compotes.

Cinnamon
Cinnamon complements - beef, pork, curries, spinach, stewed fruits, sweet and savory rice, cakes, biscuits, puddings, pickles, mulled wine, chocolate. Cinnamon is one of the "warming" spices and is considered a cold cure, which makes an excellent excuse for hot buttered toast sprinkled liberally with cinnamon.Cinnamon is a wonderful spice that makes foods and beverages taste great, but what most DON'T know is that cinnamon has really great medicinal powers as well. Cinnamon not only helps to prevent diabetes, but it also cures laryngitis and reduces fevers that you may get with the cold and flu symptoms as well as just being "yucky" sick. Now here's the BIG kicker about cinnamon. Drinking or ingesting cinnamon speeds up your metabolism. Use it if you need to lose weight. Cinnamon reduces the weight.

Cardamom
Cardamom is the dried, unripened fruit of an herbaceous perennial of the ginger family. The pods, containing highly aromatic citrus-like, floral flavored seeds with menthol undertones, follow the flowers, which bloom in clusters on long stems.
Cardamom is said to have a cooling effect on the body. Chewing Cardamom seeds disguises the smell of alcohol on the breath. Cardamom complements - fish, rice, fruit, pastries, meringue, cream, yogurt. Either crush the pod lightly and discard after cooking, or open and remove the seeds which can then be used whole or ground.

Ginger
Ginger is the underground stem or rhizome of an iris-like plant which is grown widely in the tropics. Ginger has a warm, sweet aroma and a hot, biting flavour. Ground Ginger should have a strongly spicy flavour and pale cream colour. Ginger is a warming spice said to promote sweating and relieve colds. Ginger is believed to be an aid to digestion and to help stimulate the circulation. Ginger complements - curries, stir-fries, ham, gammon, fish, fruit, biscuits, cakes, puddings, and pickles.

Nutmeg
Nutmeg is the seed of a tropical tree. The flavour is aromatic, sweet, warm and rich, with nutmeg having the more robust flavour of the two. Nutmegs should have a light brown colour and strong aromatic flavour.
Nutmeg complements - beef, seafood, veal, vegetables, potatoes, tomato and white sauce, quiches, stewed fruit, biscuits, cakes, milk puddings. Nutmeg and Mace add a sweetness and warmth to both sweet and savory dishes. Vegetables such as spinach, carrots, mushrooms and potato improve when flavored with nutmeg.

Rosemary
Rosemary is the hard, needle-shaped, leaf of a small evergreen shrub of the mint family. Rosemary has a distinctive pine-wood aroma and a strong bittersweet flavour. Rosemary retains its flavour best as whole УneedlesФ but as these can be difficult to chew, Schwartz Rosemary is chopped for convenience into smaller particles.
Rosemary complements - lamb, pork, chicken, wild vegetables, soups. It is very good with cabbage, squash, but is not recommended with red vegetables (beet, tomatoes). It is forbidden to use rosemary with bay leaf.

Saffron
Saffron, the world's most expensive spice, is the dried red stigmas of the autumn-flowering crocus. It is known as much for its properties as a dye as for its unique and distinctively pungent, honey-like flavour and aroma. Saffron complements - rice, chicken, fish, cakes, buns, curries, potatoes, yoghurt, cream.

Vanilla
Vanilla is the long, slender, black seed pod of a perennial creeper or vine belonging to the orchid family. Its sweet, slightly smoky, aroma and taste has made it one of the world`s most popular flavorings for sweet dishes.
Vanillin is the primary flavor constituent of vanilla beans. Vanilla complements - cakes, puddings, cream, ice cream, rice puddings, pancakes, custard. 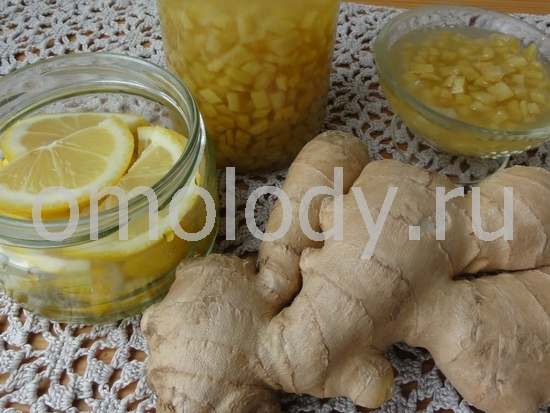